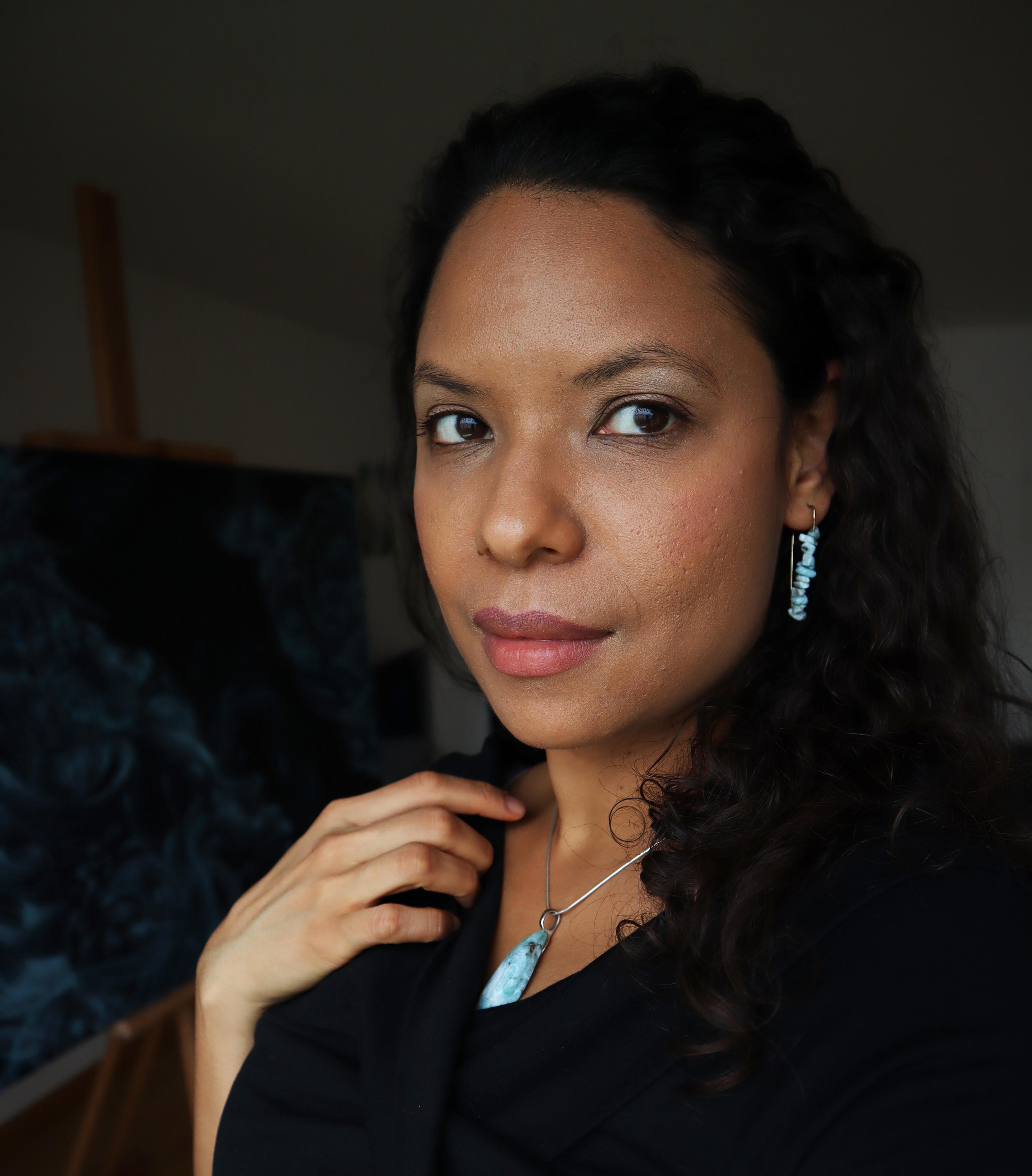 Laura Arminda Kingsley is a Swiss-Dominican-American artist based in Zurich. Born in 1984 in Ohio, U.S.A to Dominican parents. L.A. Kingsley grew up in Santo Domingo she formed her first impressions in this luscious Caribbean metropolis of magical-realist contrasts. The strong imprint left by her Caribbean childhood is palpable in her work. In 2004 after completing her Associates in Fine Arts and Illustration at Altos de Chavón the School of Design in La Romana, Dominican Republic L.A. Kingsley migrated to New York. Brooklyn’s Afro-Caribbean diaspora and the many hours she spent perusing the collections of the city’s Museums greatly informed her adulthood and art. While working as a design consultant in a frame shop and as a Teacher’s Assistant in the Ceramics Department at Hunter College Laura completed her BA in 2012. She obtained her MFA from California College of the Arts in San Francisco in 2014 and shortly after moved to Zurich, Switzerland. There she’s worked as an art educator at the Aargauer Museum and a freelance Theater Sculptor for the Zurich Opera and Ballet. Her work has been exhibited at the Zurich HB, the Museum of Modern Art and Altos de Chavon in the Dominican Republic. The Asian Art Museum, Southern Exposure, Luggage Store Annex, Heron Arts, Oliver Art Center and Isabelle Percy West Gallery in San Francisco and Oakland. Taller Boricua Gallery, Sidney Mishkin Gallery and the Thomas Hunter Project Space in New York. Casa Escute, Interamerican Gallery, Art Gallery of the Humanities Dept. of the University of Puerto Rico and the Department of State in Puerto Rico. In early 2021 her video work Murmurs of the Deep will be shown in the exhibition New Media Art at the CICA Museum in South Korea.

"My art is the way I re-establish the bonds that unite me to the universe" Ana Mendieta. * In my work, I look at the Atlantic through the lens of deep time, giving equal importance to; the microscopic and the macroscopic; folklore and science; the magic and the real, and the archaic and the new, to offer the viewer a non-hierarchical view of the natural world and human history. This necessity to use my imagination, science and history to gain a new historical perspective surged out of my grappling with painful realities. In particular; the rampant pollution of the Caribbean Sea I witnessed as a child; the institution of slavery and its legacy in my community, but foremost my desire not to let these realities define me. In my series, Murmurs of the Deep I’ve created a world in which our communion with the cosmos and nature is unmediated by cultural valuations and static ideas of identity. The deep doesn’t know nor care for our morals and prejudices, and so it simultaneously embraces and devours us. * The deep murmurs of the myriad life-forms that sprung from its crevices eons ago; the civilizations that voyaged on its surface; the secrets of the Ife as told by the many lives it gobbled up and lastly of eons to come, when all the noise has gone. 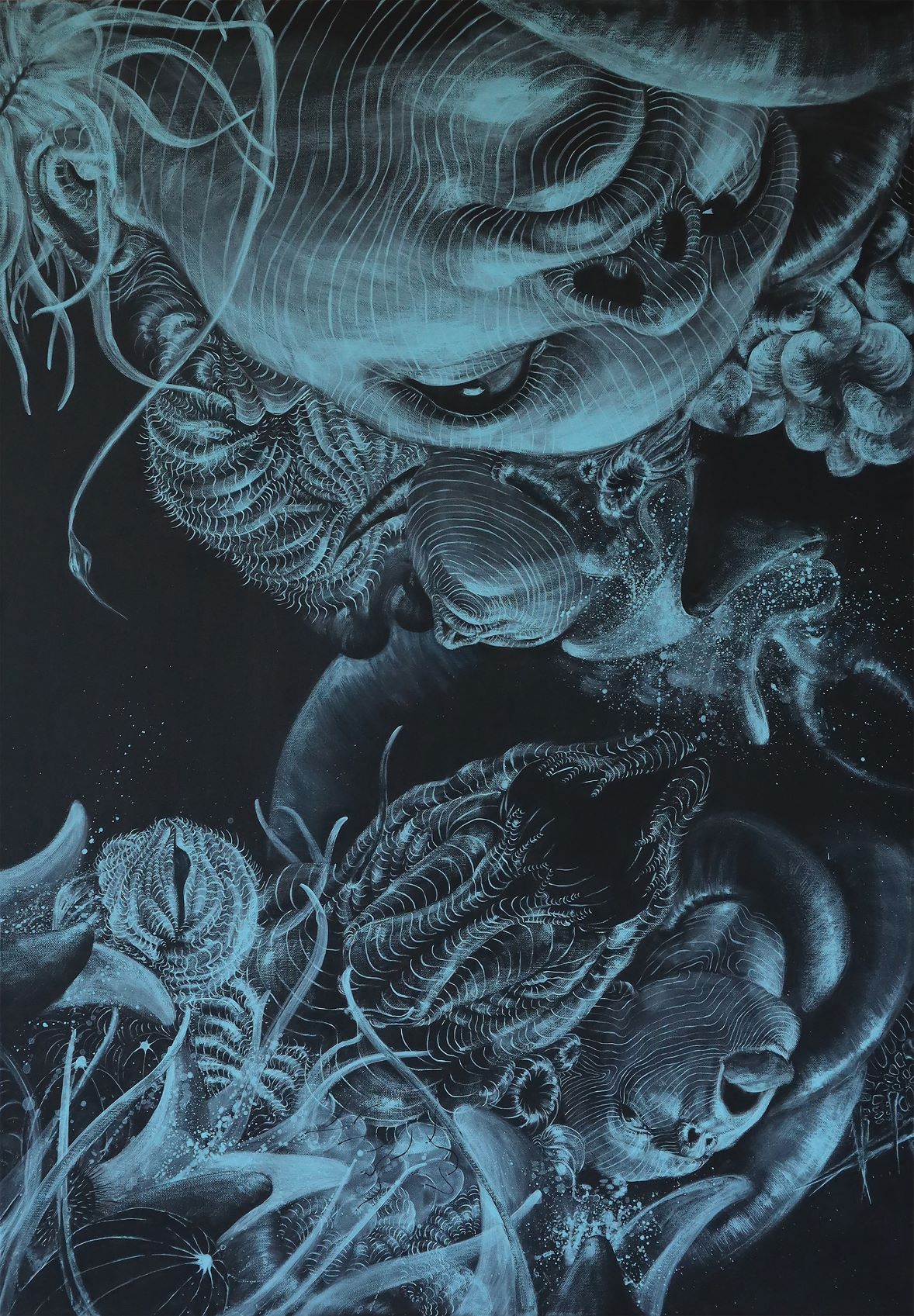 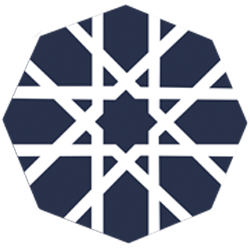